Gems of the Great Silk Road

Gems of the Great Silk Road 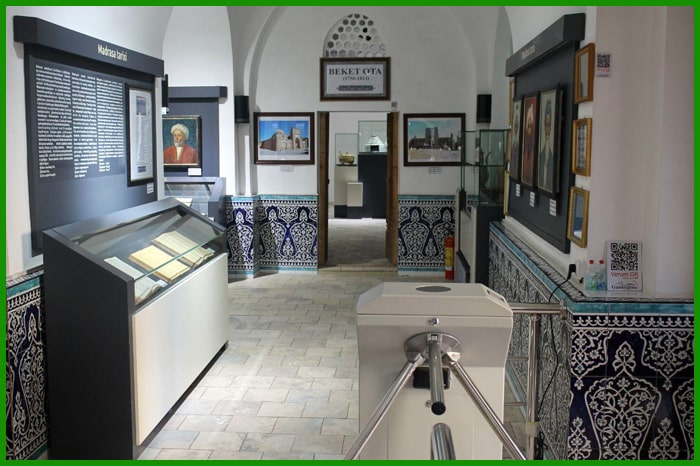 Name of trip: Gems of the Great Silk Road

Day 1: Tashkent
This day you will arrive to the wonderful country Uzbekistan. Then you will meet at the international airport driver with signboard at meeting area. You will have a wonderful city tour today with the fascinating attractions of the capital. You will start with the first attraction main square of Uzbekistan –Independence square where you will observe amazing attractions and amazing fountains. Further you will explore the local Broadway where you will discover the majestic square of the capital Independence square and Amir Timur square. After that you will direct to the fabulous Tashkent Metro that is the one of the most beautiful subways in the world and charms people by its beauty. You will experience that metro was opened in 1977. After that you will lead to the next destinations the old parts of the city such as: a Chorsu Bazaar, Kukaldash Madrasah and Hast Imam complex. You will see that this complex includes several madrasahs, mosques and mausoleum. Today you will br amzed by the important  site of the city - the Othman Quran. You will know that this is the world’s oldest Quran copy dating back to 8th c. This night will be in the hotel.

Day 2: Tashkent – Nukus (domestic flight)
In the morning you will have a flight to Nukus from Tashkent. Today you will discover the fabulous landmarks of the city and have highlight tour.  During the tour you will discover that the I. V. Savitsky Museum of art of the Republic of Karakalpakstan is one of the biggest  and most fascinating museums in all of Uzbekistan. The Local History Museum of Karakalpakstan, in the city of Nukus – is one of the oldest museums in all of Central Asia. The history of the museum dates back about 80 years, and its expositions are truly unique and interesting. In the tour you will be able to explore that today the museum has more than 56 thousand exhibits, among which there are really valuable and rare, for example, a stuffed animal of the last Turanian tiger, an extinct species. The exhibits are constantly replenished, thanks to archaeological excavations, as well as cooperation with universities and academies. The Museum contains materials from the 20th century such as Sokolov, Komarovskiy and Amaravella group. Then you will direct to Mizdakhan necropolis. You will discover that it was the ancient city before. You are going to discover the ancient site Chilpyk – Zoroastrian ancient monument that is 2200 years old. You will spend the night in the hotel.

Day 3: Nukus – Ayaz Qala – Tuprak Qala – Khiva
Today you will start the tour with travelling to the oldest city of Uzbekistan. This day you will also have a chance to discover the amazing architecture that has been preserved; the whole city is an open-air Museum. You will see that the history of Khiva is continuously connected with the state of Khorezmshahs. During the tour you will also discover that a large city on a deserted stretch of the Silk Road. Architecture is a frozen history. This statement fully applies to the city of Khiva. Two and a half millennia of its history can be seen with your own eyes, visiting the architectural monuments and museums of this ancient city. On its territory you can see 2 powerful fortresses like Ayaz Qala and Turpak Qala. Ayaz-Kala is a fortress built in the late 4th or early 3rd century BC. During this time, Khorezm became independent from Persia. Ayaz-Kala was part of a chain of fortresses that protected agricultural settlements from nomadic attacks. The fortress is located on the top of a hill about 100 m (330 ft) high, offering beautiful views of the surrounding plains. During the tour you will discover that Tuprak Qala it was a large city and a dynastic capital, with a population of about 3 thousand people. You will spend the night in the hotel.

Day 4: Khiva
This day you will discover the ancient city Khiva that has a lot of architectural attractions. You will explore that it has interesting history and cultural heritage. You will observe the inner city – Ichan Qala, rounded with majestic walls. Today you will explore the amazing the ancient buildings, palaces, mosques, Madrasahs, Mausoleums, Minarets, Caravan-Sarais and Bathhouses transformed Ichan-Qala into unique city-monument. You will be admired by 400 traditional dwelling and about 60 monuments. During the tour you will explore that in 1969 Ichan-Qala started to be historical and architectural maintaining area. You will find here the amazing attractions as Kunya-Ark fortress that was built in the 17th century and explored by Muhammad Arang Khan. Kalta Minor minaret and Tash Khouvli palace are the fascinating sample example of Khorezm architecture of 1830s was also found by him. You will spend the night in the hotel.

Day 5: Khiva – Bukhara
In the morning you will travel to the fascinating city of Uzbekistan. This day you will departure to Bukhara. According to historians, the age of Bukhara is more than 2500 years old. The ancient city still preserves centuries-old traditions and amazing rituals. Bukhara is often called the mainstay of Islam, as it is home to a huge number of mosques, minarets, and Muslim tombs. Yoill have a chance to see here green and narrow streets, big parks and beautiful gardens, historical and architectural monuments. Although they were built at different times, they are located next to each other.  In course of the tour you will discover the fascinating views of Kizilkum desert. Today you will be inspired by the travelling via the amazing Amu Darya River that considered to be the deepest river in the Central Asia. Upon arrival you will have a free time in Bukhara. This night will be in the hotel.

Day 6: Bukhara
Today you will have a chance to explore the fascinating attractions in the wonderful sacred city. This day you will have a chance to see the one of the ancient sites of the city called Citadel Ark. This Citadel dates back to the 4th century.  The impregnable Ark fortress in Bukhara is a real symbol of power and inviolability: 4.3 hectares of the inner area represented a city within a city. During the tour you will also discover the mastership of architecture Samanids mausoleum (9th- 10th century). After that you will transfer to explore the fascinating Chasma Ayub -The source of Saint Job. Today you will also have a chance to discover the fascinating views of Bolo – Hauz mosque that was built in honor of Bukhaar governor Abu – Fabyud Khan and has forty columns. Then you will direct to explore the amazing shopping domes where you will have a chance to buy interesting souvenirs and immerse into the national atmosphere. After that you will continue the tour with the fabulous attraction– Nodir Divan Begi mosque. You will see that it is one of the most fascinating sites of Bukhara. And it is also the part of Nodir Divan Begi of Lyabi Kalon Ensemble. This day you will finish he tour with amazing Poi Kalon complex. During the tour you will discover three structure (12th- 16th centuries) they are Kalon minaret, Kalon mosque and the last one is Mir Arab Madrasah. This night you will rest in the hotel.

Day 7: Bukhara – Shahrisabs – Samarkand
This day you will have a chance to discover the birthplace of Amir Timur in the town Shahrisabs. Along the way you will see the fabulous landmark Ak Saray Palace. Ak-Saray Palace is a grandiose ruined residence of Timur in his hometown of Shakhrisabz, located in the large park of the same name. One of the most magnificent monuments, the Ak-Sarai Palace, is the only portal of the residence of Amir Timur that has survived to this day. After looking at the Palace, you will be amazed by the grandeur of the building, which will surprise you.  After that you will discover the fascinating site Jahongir’s mausoleum that was built in honor of the eldest son of the Amir Timur. You will discover that it was erected for the twenty-two-year-old beloved eldest son of Timur-Jahongir. Then you will continue the tour with discovering the outstanding attractions as the Dorus Siadat and Dorus Tillavat memorial complexes.

Day 8: Samarkand
After breakfast you will discover the amazing city of Uzbekistan. Samarkand is one of the oldest cities in the world, its age is 2750 years. Samarkand-ancient Marokanda-the same age as Rome, Athens, Babylon. Samarkand is the capital of the mighty medieval empire created by Timur. Samarkand is a city of blue and green domes, bright facades and luxurious murals, in the kaleidoscope of which you can get lost. This day you will have a chance to explore the fascinating  sites as Registan square, Shakhi-Zindeh, Mausoleum Guri Emir and Bibi Khanum Mosque. Registan Square in the city of Samarkand is an outstanding example of urban planning art in Central Asia. Its name translates as "sandy square". On its territory there are 3 powerful madrasas that date back to the 15th-17th centuries and attract attention with their greatness. Then you will experience the fascinating Shakhi – Zindeh complex where is situated large collection of mausoleums that belong to the 11th-15th centuries and belong to the UNESCO world heritage site. Bibi Khanum Mosque will be amazing attraction and you will be amazed by its grandeur and beauty, you can enjoy the charming architecture. This night will be in the hotel.

Day 10: Tashkent – Departure
Driver will take you to Tashkent international airport for your flight to next destination.

Service does not include:
- Visa
- Guides
- Full board
- Flight tickets
- Travel insurance
- Entrances to all museums