The heritage of the centuries

The heritage of the centuries 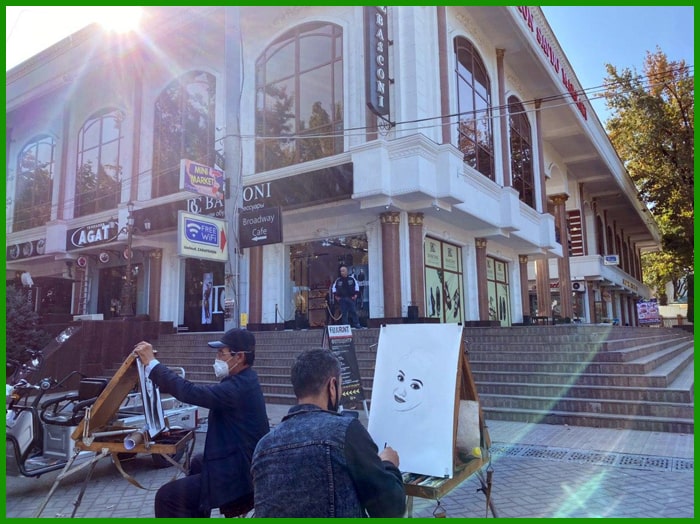 Name of trip:  The heritage of the centuries

Day 1: Tashkent
This day you will arrive to Uzbekistan. This day you will have a full day guided tour where you will discover the gorgeous attractions of the city. The first destination of the tour will be the main square called the Independence square.  This attraction was built in honor of victory over fascism in the Second World War. After that you will direct to observe the local Broadway. Then you will continue the tour with discovering the walking street situated between the Independence square and Amir Timur Square. Then the tour route will take you to the fascinating Tashkent metro where you will discover the fascinating walls and it is one of the most beautiful subways in the world. You will discover that the first line was built in 1977. Then you will have a chance to explore the old of the city, where you will see Chorsu Bazaar, Kukaldash Madrasah and Hast Imam complex which includes several madrasahs, mosques and mausoleum. You will explore today one of the most amazing site the oldest copy of quran in the world - Othman Quran. In the 8th century its owner was Othman Ibn Affan.The traces of his blood are still visible on the pages of Quran. Then ypou will transfer to the hotel for overnight.

Day 2: Tashkent – Bukhara
In the morning you will have a flight to Bukhara. This day you will have a wonderful city tour where you will discover the fascinating attractions in this wonderful city. The amazing site that you will explore called as ancient citadel in Bukhara called Citadel Ark(4th century). The Ark is a large earthen fortification in the northwestern part of modern Bukhara. In plan, it resembles an irregular rectangle, slightly elongated from west to east. In the past, it served as the grand palace of the Bukhara emirs. Then you will continue the tour with the fascinating architecture of Samanids mausoleum (9-10th century). After that you will discover Chashma Ayub. It means Job's well and you will also discover during the tour Bolo-Hauz mosque. It was erected in memory of Bukhara ruler Abu-Fayud Khan. After that you will explore the fascinating shopping domes to see the charming Nodir Divan Begi madrasahs that was also included in Lyabi House Ensemble. This day you will also discover the fascinating Poi Kalon complex that shows the architectural masterpiece of Bukhara Empire. It includes three structures built in the 12th - 16th centuries: Kalon minaret, Kalon mosque and Mir Arab Madrasah. You will rest the night in the hotel.

Day 3: Bukhara
This day you will discover the fascinating surrounding area of Bukhara. TToday you will have a chance to explore the amazing Bahauddin Naqshbandi complex. You will explore that it is located few kilometers from the city of Bukhara. Memorial of the patron saint of Bukhara - Sheikh Bahauddin Naqshbandi (d. 1389). He was born in a village later called Kasri Orifan - "the castle of those who know the divine truth". It is believed that Sheikh Naqshbandi received spiritual initiation from Khoja Gijduvani.Sheikh Bahauddin Naqshbandi was Temur's spiritual mentor, and in his youth was a weaver. In the future, he will become a patron of crafts. The worship of the holy grave of the sheikh was equivalent to performing the Hajj to Mecca. In the tour, you will be able to explore that the Bahauddin Naqshbandi memorial complex was created over five centuries. Its center is a rectangular courtyard, where the sheikh's burial is located. The memorial mosques of the XIX century are adjacent to the courtyard. Then you will continue the tour with visiting the countryside residence of Bukhara rulers - Sitorai Mohi Hosa complex. During the tour you will discover that it represents an amazing combination of different styles. You will also discover that Emir gave the name “Star – like and moon –like Palace” in honor of his wife who died young, After that you will continue the tour with exploring Sumiton village to see Chor Bakr memorial complex, the town of the dead. You will complete the tour with transferring the hotel in Bukhara city.

Day 4: Bukhara – Samarkand
In the morning you will have a morning train to Samarkand. You will explore that it is situated in the valley of the river Zerafshan. Samarkand is one of the most ancient cities in the world and is the second largest city in the Republic of Uzbekistan. Located in the heart of the Great Silk Road, it dates back about 2,500 years and is the same age as Babylon and Rome. During the tour you will discover the fabulous attractions in Samarkand as Registan square, Shakhi-Zindeh, Mausoleum Guri Emir and Bibi Khanum Mosque. During the tour, you will be able to enjoy the views of Registan Square, which has a complex of three powerful medereses on its territory, and which were built in the 15th-17th centuries. You can also enjoy the beauty of the Shahi-Zinde architectural complex and see that it consists of an ensemble of mausoleums that date back to the 11th-15th centuries and are part of the UNESCO World Heritage Site. During the tour, you will also be able to see the grandiose Bibi-Khanum mosque, which was built in honor of the memory of Tamerlan's beloved wife. Then you will direct to the hotel.

Day 6: Tashkent – Chimgan Mountains – Tashkent
In the morning you will travel to Chimgan Mountains. Upon arrival you will have a chair lift to the top to see Beldersay peak. A way takes about half an hour. During the tour you will have a chance to explore the wonderful attractions and see the amazing territory, breathe fresh air and admire a wonderful nature. After that you will discover Charvak Lake. Today you will also have some free time to relax on the beach. It is also possible to try water activities (as per season). Charvak is an artificial lake. During the tour you will see that this place is very popular tourist destination for local people and travelers from Central Asia. After that you will transfer back Tashkent and check into the hotel.

Day 7: Tashkent – Flight
In the morning, you will be transferred to the airport.

Flight Tashkent-Bukhara – from 60 $ per person

Service does not include:
- Visa
- Full board
- Travel insurance
- English speaking guide
- Entrances to all museums