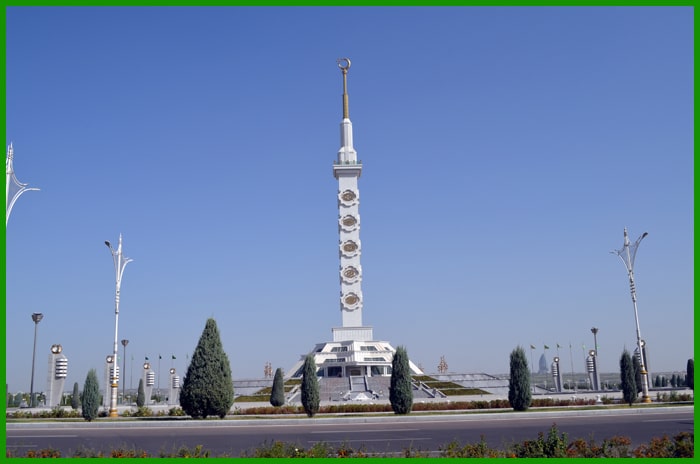 Day 1: Ashgabat
This day you will meet the driver and guide at Ashgabat International Airport. After that you will travel to the hotel and have a rest till the lunch time. Further you will have a chance to visit amazing horse-farm show where you will discover the wonderful pride of the Turkmen people for Akhal Teke horses. This day you will have a traditional tea break, Akhal Teke horse show program. Then you will transfer back to Ashgabat where you will discover the most enchanting attractions in the evening.

Day 2: Ashgabat
In the morning you will start the tour with transferring to Old Nisa, Gypjak mosque and mausoleum the last president of Turkmenistan. Then you will direct to explore the State Museum of History. This day you will explore that is was opened on 12 November 1998. It stores seven permanent galleries incorporating history, present day culture, and ethnography. You are going to rest the night in the hotel.

Day 3: Ashgabat – Merv – Mary
This day you will have a breakfast and then you will travel to Mary region that is situated in East of Turkmenistan. The third largest city in Turkmenistan, located in a large oasis in the middle of the Karakum sands in the Murgab Delta. Population-100,000 (2005). The city of Mary was founded in 1884 as a Russian military-administrative center on the site of the Tekin fortress-a settlement located 30 kilometers west of the decaying ancient city of Merv, which arose in the middle of the first millennium BC, from which it inherited its former name. The exact date of the settlement is unknown. The largest historical and cultural reserve on the territory of modern Turkmenistan is included in the UNESCO World Heritage List. Merv is the name not only of one of the oldest Asian cities, but also of the entire surrounding area in the old Murghab River delta. Since time immemorial, these lands have attracted people with their fertility and abundance of water. This night you will spend in the hotel.

Day 4: Mary – Talkhatan Baba – Yekedeshik Caves – Mary
This day you will travel to Talkhatan Baba. You will discover that Talkhatan Baba is  located near the Murgab River near Yolotan town. Talhatan Baba Mosque is located in the city of Mary, on the site of the former settlement of Talhatan. Every year, hundreds of tourists and pilgrims gather here, as the mosque is considered a magnificent example of architecture of the XI century and a Muslim shrine. During the tour, you will be able to explore that the mosque was built in the XI century, but its first scientific description was made by the historian V. A. Zhukovsky only in 1890.  After that you will direct to Yekedeshik Caves. You will discover that the complex of Yekedeshik is near Tagtabazar, which can be reached by an 8-hour strenuous drive from Mary. The cave city of Yekedeshik, located in the Tagta-Bazar district, is a truly unique and original monument of antiquity, miraculously preserved on the territory of Turkmenistan. It has the status of a State Historical and Architectural Reserve. The word "yekedeshik" means "one hole" in Turkmen. And indeed, the huge cave complex has a single entrance, which ensured its inaccessibility.  The overnight will be in the hotel.

Day 5: Mary – Margiana (Margush) – Mary
In the morning you will travel to Margiana complex. Margiana was bordered on the west by Parthia, on the northeast by Sogd, on the east by Bactria, and on the south by Areia. The capital of Margiana was located in the area of Merv the Ancient. In tours, you can also learn that in 522 BC in Margiana there was a revolt against the Achaemenid power, suppressed by King Darius I. Then Margiana was successively part of the power of Alexander the Great, the state of the Seleucids and the Parthian kingdom. In the Middle Ages, the lands of Margiana became part of Khorasan. The large settlement of Gonur with the remains of a palace and temple complex, necropolis and other structures belongs to the end of the III-1st half of the II-th millennium BC; it was probably the capital of Margiana in the Bronze Age.  This night you will rest in the hotel.

Day 6: Mary – Ashgabat
After breakfast you will have a breakfast and then you will transfer to Ashgabat. You will have a chance to break at Annau. Today you will discover the most fascinating attractions and discover great temples of Seyit Demaletdin Mosque built in 1456 which was spoilt to great lengths in the 1948 Earthquake. T In the small city of Annau just East outside of Ashgabat on N37 Highway that goes to Mary. There isn't any fee to enter, the mosque. You will rest the night is in a hotel.

Day 7: Flight
Night transfer to the Ashgabat International Airport to board a flight to next destination.