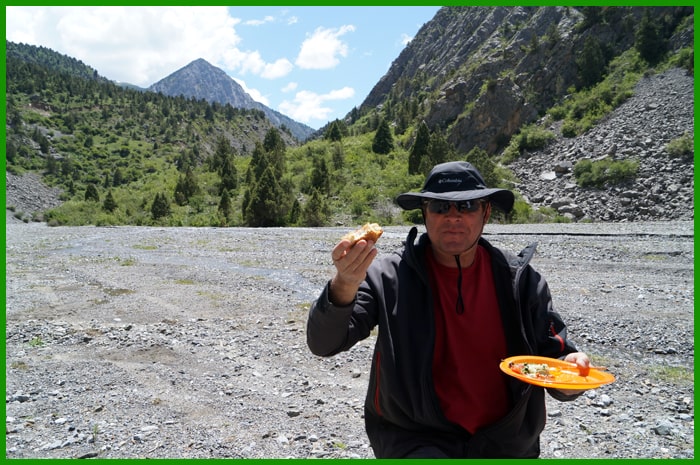 Name of trip: Treasures of Tajikistan

Day 1: Dushanbe
Today you will meet the driver at the airport and after that you will travel to the capital of Tajikistan, Dushanbe. This day is dedicated to a wonderful city tour where you will have a chance to discover the prominent sites of the city. During the tour you will explore Rudake Park, National library, White House, National state seal, and House of parliament. After that you will continue the tour with visiting National park where you will have an opportunity to make photos of Ministry of Inner Affairs. Then you will discover the views of the biggest National Flag in the world with parameters such as 165 m high pole, 30 m wide, 60 m long. The tour route will take you to Central Museum. In the second part of the day you will discover Gurminj Museum of traditional musical instruments where you will have a chance to be inspired the national instruments of Tajikistan. After that you will have a chance to plunge into the national atmosphere exploring Asian bazar. You will discover the colorful rows, buy souvenirs and fresh fruits and vegetables. Today you will explore a lot of fascinating sites of Tajikistan. You will explore the culture and many interesting facts about local residents. This night will be in the hotel.

Day 2: Dushanbe – Hissor – Dushanbe
In the morning you will travel to the ancient site of Tajikistan, Hissor fortress (VII–XVII centuries). The way will take about 35 km. During the tour, you will be able to find out that in ancient times the residence was the palace of the Emir of Bukhara Beks, the gate dates back to the 16th century and has been preserved even to our times. They still look great today, impressive and monumental. The fortress itself is located on a large hill and its walls reach a thickness of about 1 meter. There were loopholes for cannons. This day you will explore that previously there was a pool and a garden and across from the fortress there was a busy market square with a caravan serai and shops. During the tour you will discover attractions as the recently renovated monuments of “Madrasa I Kuhna” (new school of 16th-17th centuries), mosque; the mausoleum of “Mahdumi Azam” (16th century). After that you will travel to Dushanbe. In Dushanbe you will have a chance to explore Botanical garden and Victory Park where you will have great chance to observe a panorama view on the city. This night you will rest in the hotel.

Day 3: Dushanbe – Khujand
After the breakfast you will direct to Khujand city. Exploring this place, you can find out that it is located in a beautiful valley on the banks of the Syr Darya River, surrounded by powerful mountains. It is the second largest city in Tajikistan. During the tour, you will also be able to find out that the city has beautiful scenery, fresh air and clean nature. It is the capital of the Northern Sughd Region of Tajikistan with a population of 149,000. This day you will discover the Cultural Palace of Khujand. Here was elected the first president of the country. After that you will continue the tour with visiting Central Mosque that you will find in the center of the city. The overnight will be in the hotel.

Day 4: Khudjand – Istaravshan – Khujand
This day you will travel about 100 km to Istaravshan old city. Istaravshan was founded in the VI century BC by King Cyrus, a representative of the Achaemenid dynasty. He ordered the fortification of the village, which was located on the site of the current city. For this purpose, a citadel was built and high walls were erected in three rows. The new city was named Kyropol in honor of the king, although certain sources claim that it was called Kurushkada. There was an active growth of trade, as well as the rapid development of crafts. In the IV century BC, the troops of Alexander the Great conquered Central Asia. At that time, Kiropol was a large city with a good fortification. 18,000 people took part in the defensive actions. Today you will have a chance to discover Mugtepa, the fifteenth century Kuk Gumbaz Mosque and local bazaar. You can enjoy the Oriental atmosphere, visit the colorful Bazaar, see the powerful fortresses and enjoy your time. This day you will have a chance to discover special architecture of mosques and mausoleums. Then you will transfer to Khujand. This night you will rest in the hotel.

Day 5: Khujand – Penjakent
In the morning you will travel to Penjakent. This day you will transfer via pass Shahriston (3 378 m). Penjikent is the administrative center of the Penjikent district of the Sughd Region of the Republic of Tajikistan. The city is located in the valley of the Zarafshan River east of the city of Samarkand, at an altitude of 900 meters above sea level. The city is rich in its sights, architectural monuments, and a beautiful recreation area on the banks of the Zarafshan River. On the south-eastern edge of modern Penjikent are the ruins of the ancient Sogdian city of the same name — Panjikent-a unique monument of pre-Muslim culture of Central Asia. This city, which existed in the 5th-8th centuries and is often called "Central Asian Pompeii", is one of the few well-studied ancient cities of Sogd. In ancient time it was perfect city with a ruler's palace, two temples, markets, rich dwelling houses decorated with numerous paintings, wooden and clay statues of ancient gods. It important to note that the remains of this ancient city were found only in the last century. This day you will have a chance to discover remains of dwelling houses and office buildings, the citadel with the palace, the house of craftsmen, and fire worshipers church. This night you will rest in the hotel.

Day 6: Penjakent – Dushanbe
In the morning you will transfer to Dushanbe through the spectacular Anzob pass (3 372 m) and tunnel of Isticlol. Today you are going to head over a mountain passes. Today you will also have a chance to take amazing photos. Arrival to Dushanbe. This night you will rest in the hotel.

Day 7: Dushanbe – Airport
In the morning is transfer to airport.