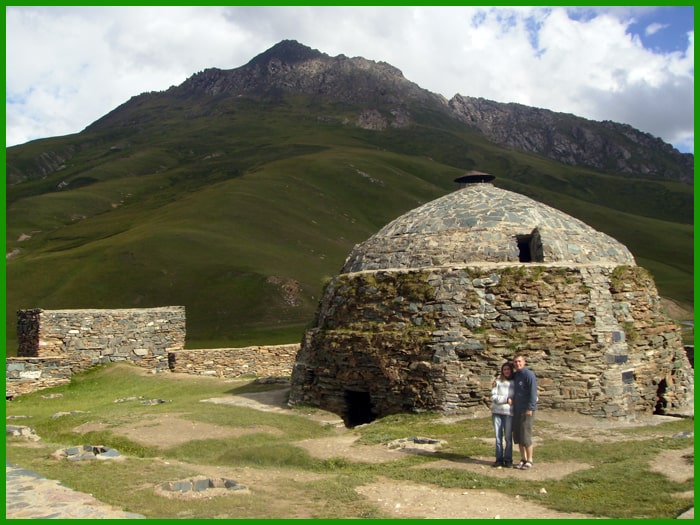 Day 2: Toktogul – Osh
After breakfast you will continue our tour to Osh city. You will have a chance to discover southern capital of Kyrgyzstan. This day you will travel about six hours through mountain road. Today you will also explore Uzgen Tower in Djalal Abad region. During the tour you will discover that it was erected in 11th century by Karakhanids. You will also see mausoleums dedicated to leaders. Then you will discover Osh city, you will explore Suleiman Too (Solomon’s Mountain). The city of Osh is considered one of the largest and oldest cities in Central Asia. Sulaiman-Too is rich in historical and archaeological monuments located in the center of Osh. In shape, the mountain is a five-domed calcareous outlier with a length of more than 1140 m and a width of 560 m, stretched from west to east along the sole. The height of Sulaiman-Too is 1175 m above sea level, 175 m above the city, the length is 2 km, the width is 250 m, there are 5 peaks.

Day 4: Osh – Kazarman
In the morning you will keep travelling to Kazarman village. This day you will explore Kazarman has a population of roughly 15,000.  You will be able to explore on the tour that it is extremely isolated and mostly known for its proximity to some popular places. You can also explore that the Makmal Gold Mine is located near the village, but it is no longer in use. Then you can also find out that the village's real claim to fame is the nearby petroglyph museum called Saimaluu Tash, which is extremely popular among travelers in Kyrgyzstan. The famous Saimaluu Tash object is located at an altitude of 3,200 m - it is a petroglyph containing more than 10,000 carvings. The petroglyphs date back to around 2000 BC and up to the Middle Ages. This nigh you will spend in the guest home.

Day 5: Kazarman – Tash Rabat
After breakfast you will travel to Tash Rabat Caravanserai. You will discover that in the ancient times it played very important role during Great Silk Road time. Tash-Rabat is a caravanserai on the territory of At-Bashinsky district, in the Naryn region of Kyrgyzstan. The structure is located on the bank of the winding Tash-Rabat River, at an altitude of more than 3200 meters above sea level. Tash-Rabat was built in the XV century on the site of an older monastery of the IX-X centuries. Tash-Rabat was a key point when crossing the Tien Shan on the Great Silk Road, as it not only provided a shelter for merchants, but also served as a fortification in the raids of robbers. Through the caravanserai, traders were sent to the cities of the Ferghana Valley. In the caravan itself, there are about 31 rooms with a thickness of 1 meter. Today you will spend the night in the yurts near the place.

Day 6: Tash Rabat – Kochkor – Bishkek
This day you will transfer back to Bishkek city. During the tour you will explore the fascinating gorges and mountains. Further you will explore Kochkor village and discover the making of the national felt carpet with local family. You will also have a chance to make your own carpet. Then you will direct to Burana Tower. You will see that in the past it was minaret. It was built in the 11th century be Karakhanids. Tower was also used in Silk Road time. Don’t miss a chance to explore open air museum and Balbals around. Today you will rest the night in the hotel.

Day 7: Bishkek – Airport
In the morning is transfer to airport.